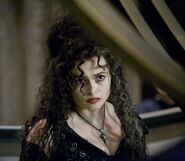 Potter, you cannot win against me! I was and am the Dark Lord's most loyal servant. I learned the Dark Arts from him, and I know spells of such power that you, pathetic little boy, can never hope to compete!"

—Bellatrix regarding her own loyalty and skill[src]

Bellatrix Lestrange (born Black) (1951 – 2 May, 1998) was an English pure-blood Dark witch, the eldest daughter of Cygnus and Druella Black (née Rosier) and elder sister of Andromeda Tonks and Narcissa Malfoy and mother of Elicia Oldenburg-Lestrange. She was a member of the House of Black, an old wizarding family and one of the Sacred Twenty-Eight. Bellatrix started her education at Hogwarts School of Witchcraft and Wizardry in 1962 and was Sorted into Slytherin House.

After graduating from Hogwarts she became a Death Eater. She was fanatically loyal to Lord Voldemort and was among the most dangerous and sadistic of his followers. While Bellatrix and Narcissa married pure-blood wizards, Andromeda married Muggle-born Ted Tonks and was disowned by the family. Andromeda was burned off the Black family tree and they were forbidden to talk about her. At the end of the First Wizarding War, while searching for information on Lord Voldemort: Bellatrix, Rodolphus Lestrange (ex-husband), Rabastan Lestrange (brother-in-law), and Barty Crouch Jr took part in the tortureof the Aurors Frank and Alice Longbottom driving them insane. They were caught and sentenced to life imprisonment in Azkaban for torturing the two Aurors.

Bellatrix escaped from Azkaban in the 1996 mass break-out, along with nine other Death Eaters. She participated in several battles of the Second Wizarding War, making it a particular goal to murder any relatives who were members of the Order of the Phoenix. She successfully murdered two, her cousin Sirius Black and niece Nymphadora Tonks with the Killing Curse. Bellatrix also murdered the Malfoy family's former house-elf, Dobby (who had become a firm ally of Harry Potter) with her silver knife. During the final battle, she was one of the last Death Eaters standing. Bellatrix was eventually killed in a duel by Molly Weasley, after her attempted murder of Ginny Weasley.

Community content is available under CC-BY-SA unless otherwise noted.
Advertisement