"Lestrange, I want that essay on my desk by tomorrow or it's detention. Same goes for you, Avery."
—Horace Slughorn to Emlyn.

Clarence Emlyn Avery (born c. 1926) was a wizard and a Slytherin student at Hogwarts School of Witchcraft and Wizardry. He was a member of Tom Riddle's gang when they attended Hogwarts, and was a member of the Slug Club. He has two sons, each of a marriage. One of his sons became a Death Eater like him, the other other just a follower of Voldemort.

Emlyn was present at the same Slug Club meeting in 1944 or 1945 as Tom Riddle and was reprimanded by the Potions Master for failing to hand in a particular essay.

Emlyn attended at Hogwarts at the same time as Tom Riddle, and was sorted into Slytherin house. He became a member of Riddle's gang, and was a favourite student of Horace Slughorn. This likely means Clarence was either a member of a highly influential family or was noteworthy skilled in one or more arts of magic.

During the First Wizarding War, Emlyn fought on the Voldemort's side as a Death Eater. It is possible that he has been imprisoned in Azkaban, because isn't appears as the dead. 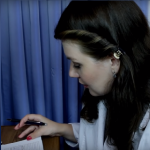