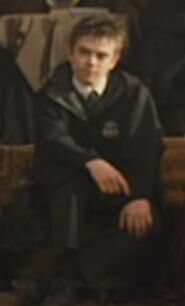 Oliver Rivers was a pure-blood who wizard began attending Hogwarts School of Witchcraft and Wizardry in 1991 and was sorted into Ravenclaw house. In its fifth year, Oliver during the class where the Professor Trelawney had been inspected by Dolores Umbridge. He was the chaser in the Slytherin Quidditch Team replacing Vaisey. Oliver also fought in the Battle of Hogwarts, but against his will. He had been forced by Draco Malfoy to do to protect the Room of Requirement with Theodore Nott, while he, Crabbe and Gregory Goyle invaded the room. However, the corridor where they were had been attacked while out Draco and the others were still in the room. He and Theodore yelled that were Slytherin and both would be spared, but the crossfire almost the rightfulness. Nott escaped, but Oliver was accidentally killed by a Death Eater.

Community content is available under CC-BY-SA unless otherwise noted.
Advertisement